Projects include Pine Curve, area in front of PACE Center

Parker’s Urban Renewal Authority heard proposals for the first time from the company that may develop several plots of land along the town’s Mainstreet, including Pine Curve, during an April 11 meeting.

Confluence Companies, which has previously developed portions of downtown Castle Rock and Golden, pitched a variety of mixed-use developments including added restaurants, retail space, plazas and residential units for the downtown corridor.

“There is a lot of opportunity so we’re excited about all the things something like this can provide,” said Tony De Simone with Confluence Companies “It’s not going to help all the businesses going in here but all the adjacent businesses that are already in place.”

The company’s proposal would take up to 10 years and would be a commitment of about $300 million of development for the downtown area.

The Urban Renewal Authority, or P3, entered into a 90-day exclusive negotiation agreement with Confluence Companies in January and will now extend the agreement another 90 days.

The My Mainstreet project, which began in 2018, has the goal to “catalyze redevelopment or development” of five underutilized and vacant parcels in the core of downtown Parker.

Confluence and its partner in the project, Craine Architecture, said their proposal for development on Pine Curve is still loose but includes plans for some kind of public market such as a 20,000-square-foot grocery store, a 4-story apartment building with retail in the base and a park or public art area.

The company also suggested creating a buffer between the development and the residential area to the east of the property.

Their proposal included an addition of 34 townhomes and five larger residential structures with 10 units per building.

“It’s really about capping off Mainstreet and really bringing that pedestrian experience across,”  said Jonathan Wehri with Craine Architecture.

Development of the Pine Curve parcel has been hotly debated within the town for years with some residents and council members supporting rezoning the property to be open space in recent years.

When providing feedback for the proposal, board members — who are the town council members and mayor — mostly gave support for this element of the proposal.

“I’ve gone to war on this one many times,” board member Cheryl Poage said with a laugh. “But I kind of like what you’re bringing.”

“I think you’re on the right track,” said board member John Diak. 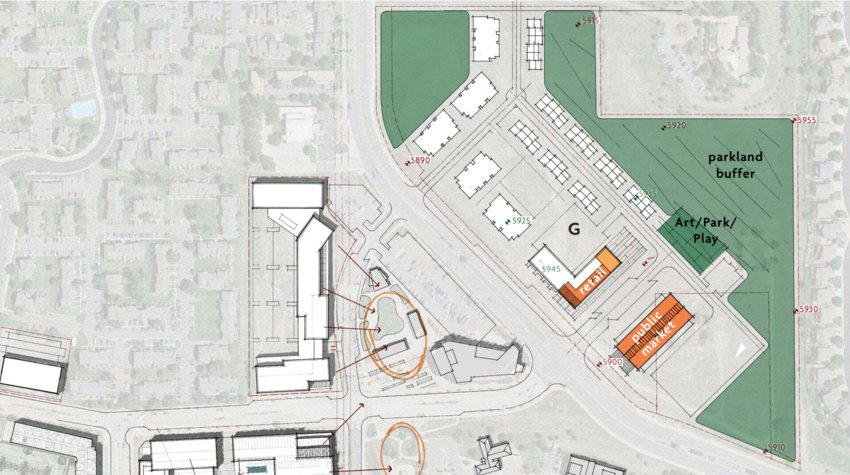 The proposed development plan for the 24-acre Pine Curve plot of land near downtown Parker.

Under the developer’s plan, the area near Discovery Park and the library, called the East Main property, would be the most dense area of the proposal with a 5-story apartment building with about 300 units over about 19,000 square feet of retail shops at the base. There would be about 330 parking spaces in the back.

The board members voiced support for this concept with Laura Hefta asking about the potential to add more shaded structures, walking paths and places to sit in the area.

Throughout their comments on the whole proposal, several board members spoke about their concerns regarding the height of some of the buildings in the plan.

“I want to make sure the development or how you build it is consistent with what people want,” board member John Diak said.

De Simone added that many of the things the community wants, such as restaurants and offices, are difficult to do as stand alone concepts.

“You need those residential components to help incentivize the other things that the public wants to see,” he said. 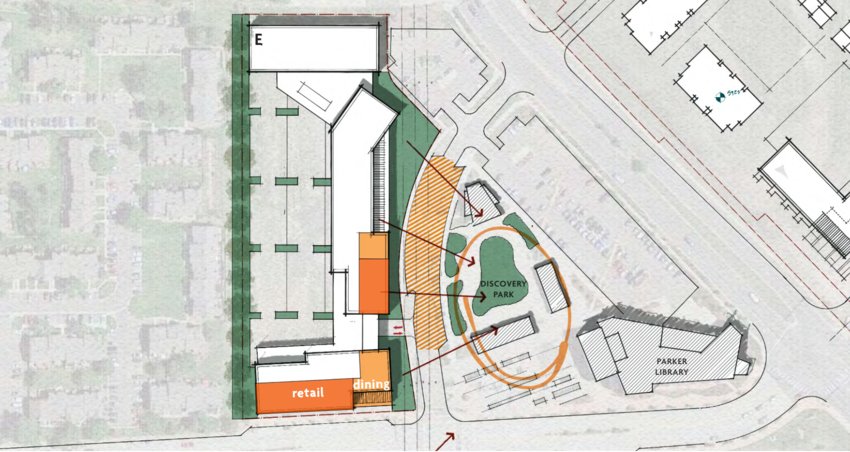 Renderings of the proposed development for the East Main property near Discovery Park.

In the parcel in front of the PACE Center, developers suggested adding two buildings surrounding a plaza-like space in the center.

They suggested adding a single-story restaurant with a roof deck on the side of the property next to Pine Drive, a 3-story office and retail building, a 5-story condo and retail building and the final structure would be a parking garage for about 300 to 400 spaces.

Photos used to describe the aesthetic of this area included one of Denver’s Avanti Food and Beverage food hall.

“It would be awesome to come down, have dinner, hang out, see some performances, maybe live music outside, have restaurant, dining, rooftop amenities that really creates kind of an active atmosphere in front of the PACE Center but then you can go into the PACE Center and see a show and just have a wonderful evening,” Wehri said.

These structures could be owned by their operators rather than leased. The company suggested having a mix of leased and owned properties in the new Mainstreet buildings.

While Todd Hendreks said he likes the concept, board member Josh Rivero said this portion of the proposal was the one he struggles with, referencing the parking garage and height of the residential building.

“That’s going to be the sore point I think,” he said. “I have to digest this one. It makes sense but I’m going to have to dwell on this one a little bit.”

The developers said this concept was similar to the Encore mixed-use building in downtown Castle Rock. Encore, which opened this year, is a seven-story building with residential, retail and office space on the west side, adjacent to Wilcox Street, and a parking garage on the east side, adjacent to Perry Street.

Poage also had concerns about this concept, saying she would like to see the area opened up more to provide a better view of the PACE Center. 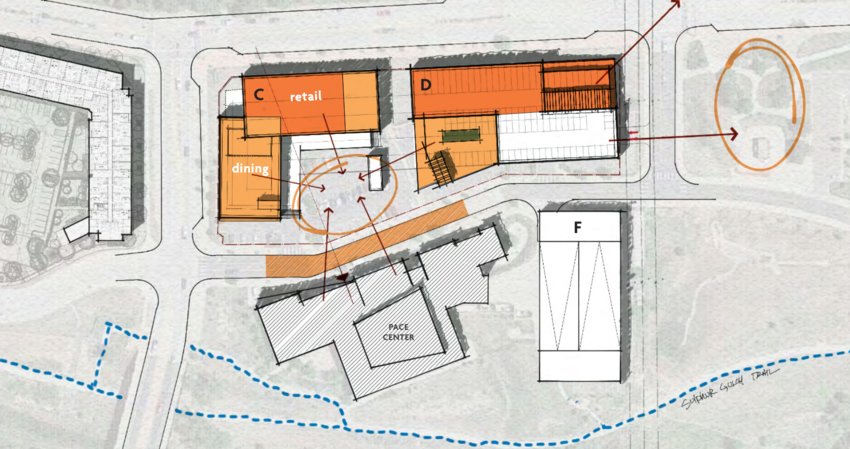 Confluence Companies and Craine Architecture proposed adding two new buildings and a parking structure to the area near the PACE Center.

Developers pitched a two-story office and retail building with about 10,000 square feet next to the schoolhouse.

The other lot adjacent to the schoolhouse would feature another two-story office and retail building but would be larger at about 28,000 square feet. That area would also include a plaza outdoor dining space, according to the presentation.

“As many rooftops and patios as you can put in downtown, please. I know the population would love that,” Hendreks said. “We’re lacking that a little bit so that would be welcome.” 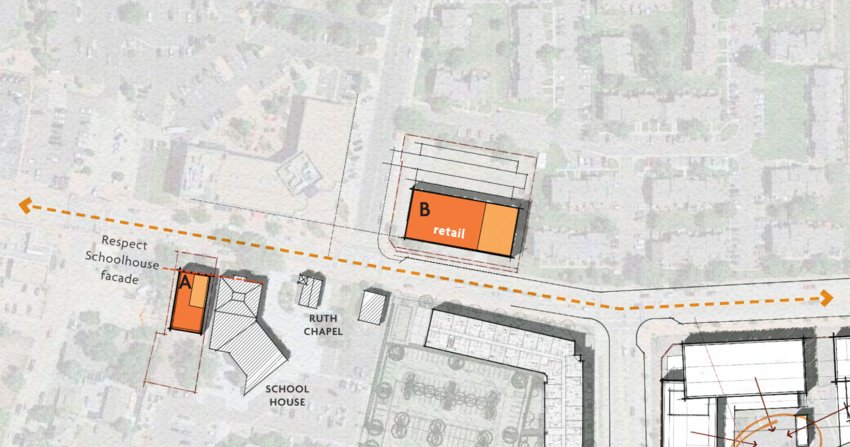 Renderings of the proposed projects next to and across from the Mainstreet schoolhouse building.

The Urban Renewal Authority, or P3, entered into a 90-day exclusive negotiation agreement with Confluence Companies in January and will now extend the agreement another 90 days.

During that period, the company said it will work to firm up the Pine Curve concept, answer any questions and begin financial modeling. By the end, they plan to present a proposal on how to make the project a reality, De Simone said.

The project would be completed in three phases over about five to 10 years, according to the proposal. The first phase would include the area near Discovery Park, the second would be the PACE Center lot and the smaller parcels on the west side of Mainstreet and the final would be Pine Curve.

The full presentation is available on the P3 Parker Youtube channel.

Lighthart named Manager of the Year

Castle Rock mayor muses on next term
Heading into his second term as Castle Rock’s mayor after running uncontested, Jason Gray feels confident voters are supportive of his model of “growth with vision” when it comes to …

How a Democrat won in Douglas County
Flipping the historically Republican Colorado House District 43 came down to a dedicated door-to-door campaign effort and a platform derived from listening to voters’ concerns, its …